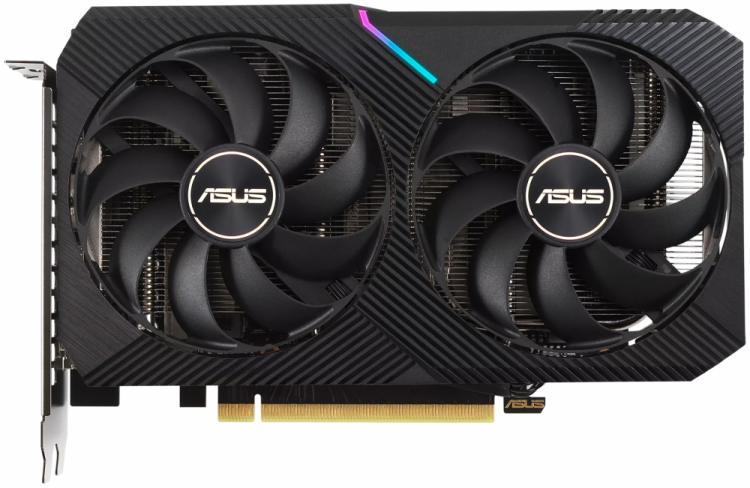 The model has been made based on the Ampere architecture and features improved tensor cores and multiprocessors. GDDR6 memory with 8 GB, as well as ray tracing and OpenGL 4.6 technology along with Direct 12 provide good performance at work and in games.

The graphics card has 3 fans that provide for effective cooling. The starting clock speed is 1552 MHz, Boost 1772 MHz, and Turbo 1822 MHz. Therefore, there is no need to overclock the graphics card additionally.

This video card is good for mining Ethereum, because it uses the Ethash algorithm. The model produces 62 MH/s, while wasting 130 watts of energy. The memory capacity of 8gb allows the video card to be used for mining for another 5 years.

This model features 8 gigabytes of video memory and has a 128-bit memory bus width. The graphics card uses the NVIDIA Ampere microarchitecture. Bandwidth is up to 224 GB/s.

For cooling, a dual-section laminated heatsink and two large fans (sized 92mm) are used. The aerodynamics of the 11 blades ensure optimal air distribution. The card takes up two slots in the case. The graphics card has a backlight (which can be switched off if you want).

The daily return that this card provides is about $0.6, and it will take about two years to pay for itself at current prices.

The graphics processor frequency is 1777 MHz (1807 MHz in Boost mode), so the card does not require additional overclocking.

The profitability that this card provides is about $0.6 per day, and to break even at today's prices, uninterrupted operation for two years is required.

The card's profitability is around $0.6 per day. Full payback is achieved within two years.

4 GeForce RTX™ 3050 graphics cards designed for gaming, graphics and cryptocurrency mining. RTX 3050 returns can be calculated on our website