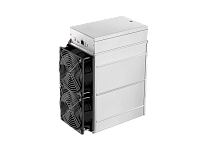 Antminer Z11 is the basic model of the eleventh series of miners mining cryptocurrency using EquiHash algorithm. Bitmain was the first manufacturer to use a 12nm chip in this equipment, which allowed the company to become a leader in its class among competitors at the time of 2019.

The release of Z11 then looked a risky move, in the community of ZCash, the main mined coin using the EquiHash algorithm, there were opinions about the implementation in the blockchain code protection from ASIC chips, as the developers of Monero did.

The successful implementation of the BM1744AA chip and the increased interest in the anonymous cryptocurrencies that are mined on this "ashik" was the reason for further plans to develop this direction. Antminer Z11 has the following features


These specifications are provided by the stock firmware from Bitmain engineers. As a rule, these programs do not reveal the full potential of the chips. Independent developers find more optimal parameters for power consumption and hash rate overclocking as the hardware is being used.

You can find the latest versions of custom and stock firmware in the corresponding sections of our site. There you may also find instructions on how to install updates on Antminer Z11.

Model Antminer Z11E was released by Bitmain at the same time as the base model Z11. They were released in April 2020 and became the first ASIC-miner for mining ZCash on 12nm chip.

Antminer Z11E produces characteristics that are not comparable to coin mining on video cards. In fact, the release of this device finally ended the existence of GPU farms working on the EquiHash algorithm. The Z11E energy-efficient ASIC miner provides the following characteristics:


The ashik performance parameters largely depend on the installed software version. Initially, this is the stock firmware from Bitmain, but over the years, independent developers select and test more optimal settings. As a rule, they most fully reveal the potential of 12nm chips.

You can find the latest versions of custom and stock firmware in the corresponding sections of our website. There you will also find instructions on how to install software updates on Antminer Z11.